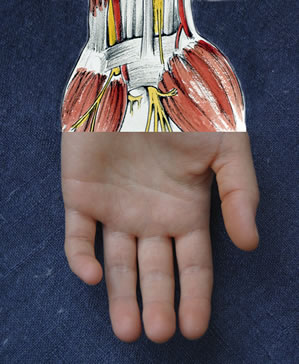 Beneath the base of the palm is a tunnel through which all the tendons that bend the fingers pass from the forearm into the hand, together with one major nerve. The median nerve is a mixed nerve, meaning that it carries fibres conveying sensation and motor fibres which supply muscle, causing movement. The areas served for sensation are the thumb, index, middle and ring fingers on the palmar side; the main muscles supplied are those at the base of the thumb that rotate or “oppose” the thumb in front of the rest of the hand.

The carpal tunnel has fixed volume, and normally the structures within it fit snugly. Any increase in size of the contents, or reduction in size of the tunnel, leads to a rise in pressure, and the nerve is the structure most sensitive to this change. Mild compression
of the nerve causes reduction in sensation in the thumb, index, middle and ring fingers, which is usually intermittent, and recovery of feeling is experienced as pins and needles. Pain is often also a feature, and is felt in the same part of the hand, often radiating up the forearm or even to the shoulder or neck. These symptoms are frequently experienced at night, and waking in the small hours with painful pins and needles is a common presenting symptom. If the compression becomes more severe, numbness may persist, and weakness and wasting of the muscles in the pad of the thumb become noticeable, with reduced ability to oppose the thumb to the fingertips. Loss of pinch together with sensation cause severe functional limitation.

The most common cause of the condition is a rise in the amount of fluid retained in the body related to hormonal changes. This occurs in early middle-aged women, but it can occur at any age in either sex, though it is rare in children. Fluid retention during pregnancy may precipitate temporary carpal tunnel compression. It can also occur in disorders of fluid balance like thyroid deficiency (myxoedema). It develops in conditions associated with thickening of synovial membranes around tendons, such as rheumatoid arthritis, and sometimes a ganglion or benign growth of fat takes up space in the carpal tunnel, raising the pressure. Anything that distorts the shape of the carpal tunnel can precipitate median nerve compression, such as a fracture of the wrist.

The diagnosis can often be made on the basis of the patient’s symptoms and signs. However similar symptoms can result from nerve compression higher up the limb, including the neck, and when there is doubt, nerve conduction studies will be carried out. These measure the speed of impulse conduction in the nerve, and the response of the muscles supplied to stimulation. It is important to identify these other causes of nerve compression, higher than the carpal tunnel, since inappropriate decompression can only make things worse.

If the condition is mild, symptomatic treatment may be helpful, including the use of a wrist splint at night. Steroid injection can be helpful, especially if there is a self-limiting cause such as pregnancy, but must be expertly done to avoid nerve damage, and in many cases is eventually followed by recurrence.

More severe compression, especially when there is permanently loss of feeling or wasting and weakness of muscles, should be treated by an operation to decompress the nerve. This is done through a one and a half inch incision on the heel of the hand, usually under local anaesthetic, which is briefly painful as is any injection. The ligament over the nerve is divided, making more room for the contents of the tunnel. A keyhole method is possible, and safely carried out be experienced surgeons, but introduces an element of risk of nerve damage, which should be entirely avoidable by open operation. The benefit of endoscopic release is a slightly shorter recovery period, but the quality of recovery is the same.

Following carpal tunnel release the hand and wrist are bandaged for a week or two but some function can be quite quickly resumed, avoiding heavy tasks which may induce pain, provided the arm and hand are mostly elevated. Relief of night waking is usually experienced once the initial operating discomfort has settled. Full recovery takes one or two months since the scar is often tender at first and strength gradually returns. Function should eventually be normal provided complete release has been carried out. Rarely patients have ongoing symptoms, either due to the diagnosis being wrong, or to an adverse reaction to the surgery such as algodystrophy (see under Complex Regional Pain syndrome). Patients with conditions that affect nerve function, such as diabetes, tend to get more severe carpal tunnel syndrome and may also fail to recover completely despite full decompression. Recurrent carpal tunnel syndrome is also rare, but does occur.